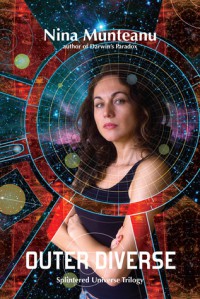 I had the pleasure to listen to this book 5 or 6 years ago, and I really enjoyed it then. I’m very pleased to say that this book has stood up well over the years. Rhea Hawke is still the bad ass I want to be when I grow up. I love her dress sense (boots, weapons, sentient great coat), her sorta pet tappin (kinda a cat with 3 tails), and her best friend Beni, who is the AI on her little work-issued spaceship. Alas, she messed up big time at work (the Galactic Guardians, which is way more bureaucratic than it sounds), and she lost all but her boot and her sorta cat.

While wallowing in her self-pity, wondering what to do with her life now, she joins a gym where she meets Serge. He’s way more sexy than his name hints at. Pretty soon, she’s spending nearly all her time at his place. She’s held back from snooping into his past, as she would have done in a heart beat when she worked for the Guardians. That’s going to come back to bite her in the butt.

I especially enjoyed the tangled relationship she has with her mom. She loves her (maybe) but hates her too (and definitely hates that she sleeps around so much!). But her mom has kept some really big secrets from her and that had to sting, so I see her point most of the time.

So many aliens! I love this aspect to the story because humans aren’t the focus. In fact, they are basically an endangered species. Barely tolerated in most civilized places, Rhea has had to work twice as hard to prove herself worthy. She’d rather do that than take the path her mom did (free love).

Then there’s the evil Vos. Cue evil laughter. So many rumors about what they can do, what atrocities they have done. I know it’s quite silly, but I love this because that’s my last name, minus and S, pronounced the same way. Hahaha! If I lived in Rhea’s universe, I’d have to change my last name or risk being shot on sight.

My one little quibble with this tale is the little bit of mystic stuff tossed in, like about all the over diverses and how they can be connected with a dream portal and how soul mates will find each other across the divereses no matter what, etc. Yawn. Honestly, this story rocks without all that and a little technical-sounding stuff tossed in to explain bridging multiple universes would have worked better.

The Narration: Dawn Harvey does a great job with all the different alien voices. She really went the extra mile, making them sound as described in the text of the story. I don’t know how she made some of those voices, but they really worked! I did notice a few mispronounced words this time around – like ‘Bedouin’ and ‘Hopi’ but that’s easily forgiven considering how much effort she put into the alien voices. The pacing is perfect. Her voice for Rhea is spot on – a hero that is sometimes vulnerable. There were no issues with this technical recording. 5/5 stars.

I received this audiobook as part of my participation in a blog tour with Audiobookworm Promotions. The tour is being sponsored by Nina Munteanu. The gifting of this audiobook did not affect my opinion of it.