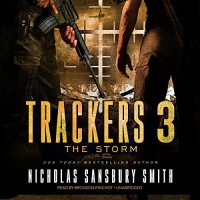 I have just flown through these first 3 books in this series. For the characters, these events all take place in the space of a few weeks. Ty is now safely with his mom, Secretary of Defense Charlize Montgomery, in a secure facility in Florida where there’s still electricity and communications with the outside world. Raven Spears continues to work with police chief Colton in Estes Park, Colorado. The white supremacist leader, Fenix, is still out there and still a threat.

One of my favorite story lines in this book is where Big Al, Charlize’s body guard, is given the chance to go find and rescue his sister. She’s his twin and his last remaining family. Al lost his wife and kids in the initial strikes and he can’t let his sister go. Turns out she’s got a drug problem and that opens a little can of worms; how to justify the man power & supplies & risk to locate her and bring her back to the secure facility? All sorts of great questions came up as we followed Big Al on his personal mission. They go through gang-controlled streets, bump into an abandoned kid with a LotR complex, and then have to see about a drugged out sister. Who is worthy of the very limited help available? People like Charlize and President Diego have to the make those calls on a big picture level. Big Al has to make those decisions in the moment on the ground on a smaller scale.

Meanwhile, in Estes Park, roving bands of violent looters become an issue. Some of these looters are drug addicted. Redford’s gang is the most troublesome of these looters because they are organized. The body count rises and police chief Marcus Colton is pulling his hair out trying to keep Estes Park safe. Mayor Andrews and her lackeys aren’t helping matters. A schism has developed between these two groups, but both want the best for Estes Park. I was very pleased to see that police detective Lindsey Plymouth had a bigger role in this book. Raven’s attempts at flirtation were a secondary thing but provided some much needed humor for the story.

Colton knows that Estes Park needs allies. Between Niles Redford’s gang, General Dan Felix (leader of the white supremacist group Sons of Liberty), and the influx of refugees, Estes Park could easily be over run. Lindsey and Raven are sent to Storm Mountain to meet with the local preppers group led by John Kirkus. Colton believes he can make a good alliance with Sheriff Thompson of Fort Collins. There is more than one betrayal and I was shocked and a little distraught over how things turned out for some of my favorite characters. Estes Park is in so much trouble!

I’ve really gotten attached to this story despite the ladies having a backseat to the men. Charlize, a retired fighter pilot, hasn’t gotten into the pilot’s seat yet. Lindsey shows promise but hasn’t gone out hunting or scouting or tracking solo like the men do. Raven’s sister Sandra is still a competent nurse at the hospital but doesn’t do much other than patch Raven up. Martha, a minor character from Book 2, is a doctor but hasn’t done much other than bleed a lot. I just need a bit more from the ladies to make this series rock. After all, Colorado is known for it’s hardy, independent, capable women. 4.75/5 stars.

The Narration: Bronson Pinchot continues to give a great voice for Raven and for Colton. His voice for President Diego continues to grate a bit. Pinchot’s female voices are feminine and his kid voices work well too. His calm creepy voices also work really well for our multiple bad guys. 4.75/5 stars.