Rituals of the Dead by Jennifer S. Alderson 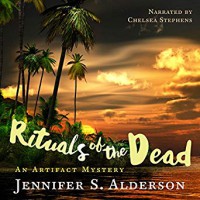 Note: Even though this is Book 3, it works fine as a stand alone novel.

Zelda Richardson continues to stumble around the antiquities gathered in Holland, making enemies and uncovering old mysteries. I liked this story quite a bit more than Book 2 mostly because I like Zelda more. She’s grown up a bit and now comes off as perhaps 20 years old instead of 15. She’s still a bit unsure of herself and not the swiftest to catch on, but some of that can be excused by the extraordinary circumstances she finds herself in.

Papua, New Guinea is the featured culture in this novel. Once upon a time, Dutch colonists cluttered up the Papua countryside bringing Christianity, modern medicine, and boxer shorts while also taking away cultural artifacts. The story portrays both sides of how modern peoples with their religions and sciences both helped and harmed the native peoples. I really like that the author didn’t shy away from showing this. It would have been easy to throw a rosy blanket over it but it’s way more interesting this way.

Zelda is still hanging out with her friend Friedrich but he’s got a much smaller role in this novel. Zelda still has him strictly in the Friend Zone even as she dates a few other guys. Her boss (Meric – spelling?) still questions if she’s the right one for the internship or not. Basically, Zelda’s life is this constant teetering see-saw. Albert Schenk still isn’t her fan.

The Amsterdam museum she works for is trying to gather enough Asmat New Guinea art pieces for a good show and Zelda has been tasked with gathering as much basic info as she can. In digging up info, she learns of an American artifact obtainer, Nicholas, who went missing in the 1960s. The story has a series of flashbacks showing what Nicholas was doing up to his disappearance and those are quite well told. Even as I enjoyed them, I wish there had been more Papua characters in the tale.

In the 1960s, the priests sent to convert the indigenous peoples to Christianity were instructed to destroy old, ritualistic artifacts and art (which had been obtained by trading medicine and living utensils for them). This put some people in a difficult place – not everyone agreed that destroying these cultural items was the right thing to do. It’s a great little slice of questionable history to explore through this murder mystery.

The murder mystery part is a little long in getting spun up but I felt it was a delicious burn. We have one murder at the museum that doesn’t point to anything Zelda is tripping around in. Then later we get a second one that definitely points to whatever Zelda has gotten herself in. Plus there’s that decades old mystery of the missing American to solve. In the end, things mostly get figured out by Zelda though one small piece to the puzzle comes out in a random confession… and I felt that was a plot device and not really something the character would do.

All told, it’s an interesting mystery and I’m now warmed up to Zelda. 4/5 stars.

The Narration: For some reason, this series switches narrators which I find a bit distracting when I’m listening to a series back to back. Chelsea Stephens does a good job with Zelda’s voice. All her character voices are distinct though her male voices need masculinity. She did a good job portraying Zelda’s emotions and her pacing was good too. I know it’s a bit to ask, but since this is set in Holland, it would be nice to have a Dutch accent for the Dutch characters. That would really make it feel like the story is set in Amsterdam and not just any Midwestern USA city. 4/5 stars.

I received this audiobook as part of my participation in a blog tour with Audiobookworm Promotions. The tour is being sponsored by Jennifer S. Alderson. The gifting of this audiobook did not affect my opinion of it.