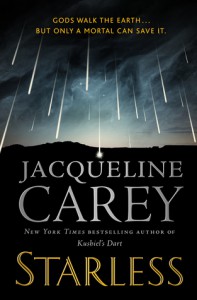 I’ve just been on an adventure with Khai and Zariya. The desert sand is still wedged in creases, the sea salt adhering to my hair, and some jungle forest mystery patch is making it’s home in the shady part of my imagination. I’m a long time fan of Carey’s works but Starless may have surpassed them all.  The plot was unexpected, the characters unforgettable, and the settings deadly beautiful.

A beautiful mythology wends it’s way through the plot. The stars, children of the sun Zar and he three moons, were cast from the heavens ages ago. Now these stars reside throughout the world, each gifted and bestowing their gifts upon mortals. Sometimes this is through direct interaction, sometimes through objects like rare seeds or a magical pearl.

The story is told through Khai’s eyes. He grows up in a desert fortress being trained by the monks on a variety of skills. He was born with a destiny: to be the Shadow to the Sun Blessed, Zariya. Once we’ve gotten to know Khai good and well (several years have passed), he goes to the royal palace to serve as Zariya’s body guard and confidante.

Since I had already fallen in love with Khai, I wasn’t sure I would bond as well with Zariya. Her world is so very different from the desert fortress but she has not been without her trials. An affliction challenges her daily. On top of that is the endless intrigues, making it difficult to trust anyone other than her Shadow. Zariya, being the last daughter of the last wife, believes she is destined for a simple marriage and child bearing. However, prophecy steps in and drags Zariya and Khai off on a world-saving adventure.

If Jacqueline Carey were ever to write horror, she would send a tremble through the entire genre. The creepy critters from the sea that threaten to decimate the world are truly things of nightmares. I thought the ants from the 3rd trilogy in the Terre D’Ange Cycle were scary; however, the critters from Starless take the cake.

I loved the gender fluidity of Khai’s character. The desert people call it ‘bazim’ (not sure on spelling). Khai grew up among only males but once he moves to the palace, he spends most of his time in the women’s quarter, guarding Zariya. There he learns about women and starts questioning his own gender-based roles in society. It’s all very well done. As Khai interacts with more cultures, each shares their take on the matter, sometimes in subtle ways, sometimes bluntly. Khai grows by leaps and bonds and I loved his character all the more by the end of the tale. 5/5 stars.

The Narration: Caitlin Davies did a great job with this book – a truly top notch performance. She provided so many different accents, keeping all the characters unique. Plenty of emotions, subtle and not, were on display in this tale and Davies gave them all their due. I especially enjoyed the valiant Mayfly. 5/5 stars.