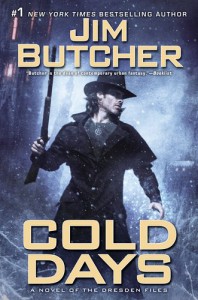 At the end of the previous book, Ghost Story, Harry wakes up and finds that Mab, Winter Queen, has kept his body alive with the help of Demon Reach island. He’s a bit grumpy about it. Mab means for him to keep his word and he is now the Winter Knight. First, he has to spend months at Arctis Tor in physical therapy. Thankfully, he has a competent and beautiful therapist, Sarissa, to help him through it. Unfortunately, he is tested nearly daily by Mab herself and this often means sharp pointy things being flung at this head.

Harry is introduced to the Winter Court on his birthday with a big party. Of course, these are the fae and a party wouldn’t be complete without some serious injuries. Maeve shows up in her vagazelled birthday suit and taunts Harry in a variety of ways. Then a Red Cap makes the mistake of harming Sarissa and this gives Harry the opportunity to show off his new powers as the Winter Knight. Once the festivities have tamed down a bit, Mab quietly sets Harry on his first task for her: kill one of her strongest minions, a specific immortal. Harry is going to be hard pressed to carry out that order!

Back in Changes, Harry had a lot happen to him that changed his life – he lost his office, apartment, car, etc. Now in this book, I actually see Harry has changed. We’ve seen Harry pressed to the limits before, having to make hard decisions. These things over time have aged him; some have given him wisdom and some have subtly changed him in other ways, like becoming more cynical. Now he has the mantel of the Winter Knight and that means he not only has this magnificent power, he also has these animalistic urges to protect what is his and destroy anything that threatens him and his, and sometimes even those things that deny him his will. Harry has this roiling mass of violence and lust just beneath the surface that he has to keep in check all the time, or does he? The poor man will be tested sorely!

First things first: very few people know that Harry is still alive. All his friends think he is dead. So you can imagine what it’s like for him to stroll up as the Winter Knight. Ha! There was a plethora of feelings here as he reunited with his friends. Some were angry. Some were happy. Some had very mixed emotions. Then Harry himself has quite a few emotions about being alive and being the Winter Knight.

Harry doesn’t have a place to stay in the mundane world, so Molly puts him up at her swanky apartment. Apparently, she did a job for the svartelves and they were quite pleased with her work. I should mention that all that physical therapy and combat training with Mab has left Harry well muscled. Molly wasn’t the only one who noticed.<img class="emoji" draggable="false" src="https://s0.wp.com/wp-content/mu-plugins/emoji/twemoji/svg/1f609.svg" alt="