The Paper Menagerie and Other Stories by Ken Liu 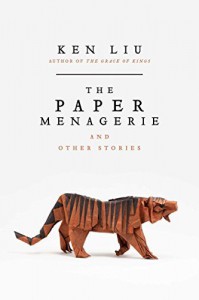 This is my first adventure in Ken Liu’s works and it does not disappoint! Liu really shows off his diversity in this collection. From historical fiction to fantasy to science fiction to murder mystery to contemporary literature – Liu does it all well.

Below is my summary and thoughts on each story. I do my best to avoid spoilers. Most of the stories have a pretty serious ending, though there are few that use humor here and there. This is a thought provoking collection of stories. Several cultures are represented and many of the stories carry culture clash themes.

“The Man Who Ended History: A Documentary”

Evan and his wife Ming Ping discover an atomic particle that lets humans view a snapshot of history. As their discovery is put into use, lots and lots of questions are raised. The initial focus is given to an atrocity carried out by a Japanese experimental science group (Unit 731) during WWII. This story was chilling and thought provoking. Should the past be laid to rest so that future generations can move forward? Or should we bear witness to every atrocity of the past, keeping them close in memory? 5/5

Hiroto lives on a space ship, the Hopeful. The story moves back and forth in time as our main character has flash backs to his time as a kid. His family packed up and went with all their neighbors to a tent city awaiting to board a space ship. However, not enough were available. Yet kid Hiroto gets a seat on an American space ship that launches in time to avoid the asteroids that slam into Earth. His past weighs heavily on him as he makes decisions in the present. While this story was interesting, it didn’t hit me as hard as several of the others. 4/5

Earth has become polluted and the Sea Foam carries humanity outward to another habitable planet. In Earth’s last transmission to the ship, they send the specs on how to build a microscopic virus that allows one to become immortal. The ship occupants decide to let each person decide for themselves. However, because of how things are on the ship, for every immortal, there must be someone who chooses to age and die. Since the ship is traveling for generations, this was common sense. Maggie is the main character we follow through the story. When Sea Foam does arrive at their destination, there’s a surprise waiting for them and folks have yet another choice to make. There were several creation myths woven into the story quite cleverly, bringing up the question of whether they could be true. 5/5

“The Bookmaking Habits of Select Species”

This story explores the vast ways the peoples of the universe write and read books. Some use a proboscis to both write and read books, like a record player. Some do so through scents and flavors. Another species are large strung out wisps that float through the universe reading planets and black holes. There’s a few others, but I don’t want to spoil it for you. This story was a big info dump, but a very interesting info dump, like an encyclopedia entry. I really enjoyed this one! 5/5

Set in the gold rush era of 1860s in Idaho, Lily Seaver and her dad Jack make friends with the local Chinamen. Lao Guan (or Logan to his American friends) tells Lily Chinese stories of Guan Yu, a glorified or perhaps mystical warrior of old. However, the Chinamen butt heads with some locals, Obie and Crick. Eventually, Obie brings charges against Logan. I really thought I would enjoy this story more, as I typically like Old West tales. I found the pace slow and my mind kept wandering.  3/5

“The Litigation Master and the Monkey King”

The litigator Tian is considered lazy but when a widow comes to him for aid, he stands up for her at the local court. He succeeds only to have the widow come to him again for assistance on another matter. The entire time he chats away with the Monkey King in his head. The story starts off a little comical as Tian was dreaming of enjoying a big feast with the Monkey King. Then the story gets serious and then it gets a little brutal. Still, I liked it. Tian has some idea of what his good deed will cost him and even though he has a quick tongue and a quicker wit, he doesn’t make it out of this story unscathed. 5/5

Jack’s mom is a mail order Chinese bride and his dad is American. Jack has to muddle through growing up with all the comments from neighbors and friends about mail order brides. His mom is a paper artist, making him origami animals to play with. As a small kid, he adores these animals. But as he ages, the insults start getting to him. He packs away his animals and demands real toys. He wants American meals and for his mom to speak good English. He starts ignoring her and is ashamed of her and doesn’t want to look anything like her. The story was rather sad but poignant. I think anyone who has struggled with cultural identity can relate to this story, no matter what your heritage is. 5/5

Rina was born with an ice cube for a soul. Her college friend Amy has a pack of cigarettes for a soul. Each character has their soul manifested as an object that must be protected. Rina lives in constant fear that her cube will melt and her soul will be no more and her heart will cease to beat. Going out for anything requires a thermos and a freezer at the destination, which limits her socializing. It was a fun little piece though a bit slow moving.  4/5

The AI Tilly and the Centillian Corporation control info. They are in nearly everyone’s house via their electronics, monitoring all their wants and needs. Tilly is helpful in making suggestions and in offering up directions and coupons and even playing match maker. However, a small group of people (including Jenny), believe this kind of data gathering to be wrong. Tilly is so pervasive in Sai’s life, he no longer knows if what he wants is truly what he wants. This story held my attention throughout and was a bit relevant to today’s arguments on government monitoring of phone and internet. 5/5

Liang and his father are demon hunters and they start this story off hot on the trail of two hulijing. Yan and her mother can shape shift into foxes. Liang corners Yan but then lets her go, continuing to meet in secret a few times a year. As the railroad progresses into their area, magic begins to fade out. Liang and Yan each have to find a way to reshape themselves or fade away. The story was a bit haunting, a little sad, but with hope at the end. 5/5

Lilly Dyer is going to school in Taiwan during the Communist craze. She and her dad are from Texas but she’s constantly teased at school for her Chinese lunches. One day she meets Mr. Kan and his adopted grandson Teddy. Mr. Kan has a bit of magic – literomancy – which means he can tell fortunes from words looking at the hidden meanings in the characters. Lilly inadvertently gets Mr. Kan and teddy into trouble when she shares some innocent stories with her parents over dinner. I did not see that ending coming! It was a sweet story about building friendships despite vast cultural differences and then it ended so harshly. 4/5

This story is told in 3 voices, like written letters. Paul and Erin were traveling a lot for work but then had Anna Larimore, their accident baby. When Anna is a teen, she catches her dad at home having sex with his 4 simulacrum of his past infidelities. Paul helped create the simulacrum and he didn’t see any difference between them and other virtual tech. Anna becomes estranged from him and eventually her mother leaves her a message about how one weak moment shouldn’t define a person for the entirety of their life. It was an interesting story but a bit short. I felt more could have been done with the simulacrum and how their wide-spread use has affected society. 3/5

The Watcher has killed yet another prostitute in the Boston area. This time, the prostitute’s mom, Sarah Ding, hires PI Ruth Law to find the killer. Ruth used to be law enforcement, but then tragedy struck and she went into the private sector. She has various enhancements, as many folks do in the story. Some strengthen her grip or give her muscles speed. She also has a regulator, which controls her adrenaline spikes and suppresses her sorrow. This was a pretty good murder mystery. Additionally, I like all the tech. I ached for Ruth and her loss and her inability to cope, relying heavily on her regulator to block out emotions. 5/5

This tale starts off talking about aliens who can join together, experiencing each other’s dreams, fears, hopes, memories, feelings, etc., but when they separate, they are basically copies of one another. The story is a bit rambly, kind of broken up, and makes large leaps. There is this bit about a couple and their child, but it doesn’t really anchor the story. There’s lots of talk about what is love and such. This tale didn’t really work for me. 2/5

“A Brief History of the Trans-Pacific Tunnel”

In this little bit of alternate history, a great tunnel was built in the early 1900s connecting US pacific coast with Japan and China. The story follows a now old, retired tunnel worker Charlie, and Betty, an American woman with grown children (who are off doing their thing). The story flashes back and forth between their blossoming relationship and his memories of digging the tunnel. He has nightmares sometimes about the things he had to do while building the great tunnel. This story made me think of some of the early construction in the US, such as the Hoover dam and some of the big New York buildings. There’s a human cost to such success.  5/5

I received a copy at no cost from the publisher in exchange for an honest review.

The Narration:  Corey Brill did a fine job with all the Japanese words and accents. For some stories, only a few character voices were required but each was distinct. Joy Osmanski also did a nice job. When there were only a few character voices required, I could easily tell the difference between them. Although when singing the Irish wake song, her voice lacked masculinity (in “All the Flavors”). for “Simulacrum”, the two narrators tag teamed it, which was well done.