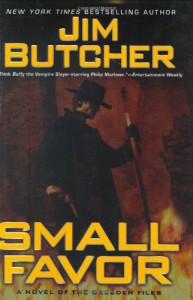 Who’s afraid of the Big Bad Billygoat? If you’re not, then you should be and this story serves as a good example as to why. The story starts off with a friendly snowball fight at the Carpenter household, which then turns into a murderous brawl between Harry and some gruffs (which look a lot like upright billygoats). As Harry ponders over the implications of this latest tussle, Sargent Karrin Murphy of the Chicago PD tasks him with checking out a site with his wizardly senses. There he finds a large pentacle…. and Mab, a Queen of the Winter Court. She calls in a small favor from Harry: John Marcone, crime lord of Chicago, has gone missing and Mab wants him found.

When Mab is in the human world, her voice alone can kill mortals. So she talks through a grimalkin, which is like an extra evil large cat. The things Mab can do to Harry with just her voice make me shudder! And Toottoot tried to warn Harry, but Harry is too curious for his own good.

This is probably my 2nd or 3rd reading of this book and for some reason I always forget everything about it except for the gruffs because they are awesome and scary. And perhaps because Harry is always mentioning their..um… tackle. So once again I was pleasantly surprised by what took place in this installment of the series.

The Denarians are back in play and they are after something pretty darn important, if only Harry could figure out what it is in time. He teams up with Anastasia Luccio (a Warden for the White Council of wizards), Ivy the Archive (who has everything that’s ever been written down in human history memorized), and her bodyguard Kincaide (who has a secret supernatural side). Eventually, Harry has to make some hard choices about whether or not to do a trade with the Denarians. He is not a happy camper about it and he decides to play dirty (hooray!).

Luccio actually makes a play for Harry and he is totally oblivious. Poor dude. Bob the Skull has to point it out to him later. Of course Bob does it with his usual entertaining sarcasm. Harry’s love life, tho small and intermittent, is a mess.

Sanya and Michael (both Knight Templars with saintly swords) lend a hand in the final showdown. Murphy, Thomas Wraith of the vampire White Court, Molly (Harry’s apprentice), and Toottoot with the honor guard faeries all volunteer to help Harry out in some way. This lengthy scene is pretty intense. Harry finally puts a name to what Ms. Guard is, besides being a very deadly assistant to John Marcone. Harry also discovers a new power which, upon explanation from Bob, scares a little poo out of him.

One of the things I really like about this series, is that as the stakes get higher, the consequences go up as well. People get injured. In this book, one of Harry’s friends takes a hard hit and the book leaves us wondering just how bad it is. It’s a good thing the next book in the series is already out. Also, more and more Harry is learning that he can’t be the sole person to fight evil; he needs help from friends and allies and he won’t be able to protect them all.

Narration: James Marsters continues on as the voice of Harry Dresden. I really liked his creepy voice for the grimalkin and his uber-creepy voice for Mab. As always, his voice for Toottoot is both amusing and sincere. Marsters makes a pretty good gruff too, sounding like an angry billygoat.