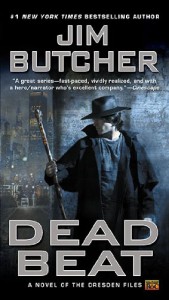 Note: I feel that Death Masks, Book 5 is where reading this series out of order starts to do you an injustice. This book does work as a stand alone to some extend, but you will get major spoilers for the previous books in the series and it also pulls in characters we have met before. So I recommend reading the previous books before you jump into this one.

It’s going to be another long weekend for Harry Dresden, Chicago’s only professional wizard. Mavra, a Black Court vampire that Harry has previously tangled with, blackmail’s Harry into seeking out the Word of Kemmler (a powerful book by the necromancer Kemmler). This will be no easy task for Harry and he will be constantly weighing which is the lesser of two evils for the entirety of the book.

This is one of my favorite books in the series for several reasons. First, I really felt the stakes were higher in this book and I like that Harry doesn’t have many clear cut good/bad choices in this story. True, he’s trying to save all his friends some grief, but in order to truly pull that off he has to deal with Mavra or find a way to double cross her that doesn’t put any of them in peril. Second, Harry gets more responsibility in this book. I think he’s ready for it even if he doesn’t and while he doesn’t like the guise that responsibility comes in, I think he will be a positive influence on others who share the same responsibility. Finally, there’s a dinosaur. Yup. Harry Dresden and a dino. Freaking awesome!

Waldo Butters, the mortician, gets a larger role in this installment of the series as well. I really like how Harry doesn’t discount Butters’s abilities just because Butters is afraid. There’s plenty of scary bad guys in this book and it makes sense that non-magic users would find them super intimidating. Polka will never die! – thanks to Waldo Butters.

Sheila Starr, a woman who works at a bookstore, is another interesting character. She offers Harry the chance to flirt but she also has her secrets. Then there is Carlos Ramirez, one of the Wardens for the wizarding White Council. I like his cockiness and willingness to jump into the middle of things. Then there is the Wild Hunt and the Erlking who makes life for Harry just that much harder. Bob the Skull also plays a critical role and we learn a bit more about Bob’s past.

Harry – the poor man! He has to face some tough truths in this book and one of them is about his own flexible moral compass. Another is about what powers he is offered by stronger beings and how much he is or is not willing to lean on them. However, the ending was just as satisfying as ever. I like that things are a little messy and that not everything is wrapped up with a pristine halo at the end.

Narration: James Marsters continues to do Harry Dresden justice with this series. I also like his nerdy, Jewish voice for Waldo Butters – he does a great job with this character when he is panicking. Ramirez’s smooth Hispanic accent was nicely done as well. Captain Antonia Luccio’s Italian accent was lovely as well as decisive and tired from the fight. Marster’s voice for Mavra once again sent chills down my spine.