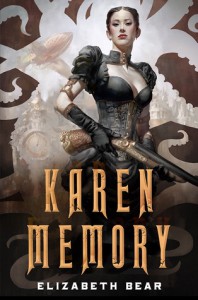 This is Karen Memery’s story. She’s a prostitute, an orphan, a loyal friend, a fair shot, an excellent horsewoman, and a fair seamstress. Set in the western town of Rapid City in the late 1800s on the west coast of the US, most likely Washington territory, there’s plenty of little steampunk touches to keep me happy. However this story is mostly about the people, and I was not disappointed one bit.

This tale is told in a first person manner as if you were reading Karen’s journal front to back like a printed novel. I instantly liked Karen. She wasn’t raised with much schooling though she has some common sense she learned from working with horses before she was orphaned. That common sense lead her to the bordello run by Madame Damnable, who has a peg leg and runs a respectable and clean establishment. She’s been saving up to move on once she is ready. But things go awry one night when Merry Li shows up with an indentured Indian (from India) woman named Priya. Both are in bad shape and the bordello ladies immediately have to face down Peter Bantle and a few of his men. It wasn’t easy.

So starts some of the toughest days of Karen’s life. Street walkers are turning up dead and dumped in places they will be found. Marshall Bass Reeves plays a prominent role in this novel (hooray!). Here’s my little confession – until last year, I was completely oblivious to the historical figure Bass Reeves, the first black US Marshall west of the Mississippi. He made an excellent character in this novel. He’s hunting a serial killer that may somehow be connected to the mess in Rapid City.

I’ve long been a fan of Elizabeth Bear’s work because she has such a variety of characters in her novels. This book is no exception. We have folks from so many backgrounds. Russian, Indian, Chinese, Native American, African American, French, and probably some others are all represented in this novel. Most of them are multi-dimensional. Now to add to that, this story has folks of various sexual orientation. Hooray! SFF in general needs more of this. There’s a touch of romance and it was very sweet to see through Karen’s eyes.

Then we have all the awesome tech. It’s there, it just doesn’t eclipse the kickass characters and the plot. There was a submersible, a few dirigibles, a very fancy Singer sewing machine, and a mind control device that is put to nefarious deeds. There were references to more things, like mad scientist duels, and such. These steampunk touches were enough to add to the scenery but not enough to become the focus and take away from the plot and characters.

I have to talk about the horses. These are important to Karen and since I have donkeys, I really connected with what she felt towards the horses Bass Reeves and his posse man (Sky) brought with them. Karen grew up with horses and had several ‘friends’ among the horses. When she was orphaned, she had to give all that up and it was terribly hard. Now she finds herself around these horses and so many feelings she had kept under lock and key come to the surface. Tear-jerking scenes folks! As Karen says, once you’ve made a friend of a horse, your life will never be the same again.

The plot had some unexpected turns. I simply didn’t want to put this book down.  It started off with this parlor showdown between Madame Damnable’s ladies and Bantle and his men and the tension was kept going throughout, though there were plenty of scenes that were more intense. At first, there’s simply this immediate problem to deal with, but that leads to a bigger issue and then that one leads to yet a bigger issue. It was very well done. This story left me feeling highly satisfied. Yet I can’t but hope for another story set in the same world, or even another Karen Memery story.

I received this book free of charge from the publisher (via Audiobook Jukebox) in exchange for an honest review.

The Narration: Jennifer Grace did a most excellent job with this book. Most of the book is in Karen’s voice, but Grace had a range of accents and voices for all the other characters. Her male voices were quite believable. I especially liked her voice for Priya and her voice for Bass Reeves.