The Queen of the South by Arturo Perez-Reverte 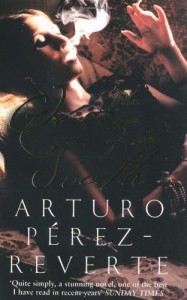 Teresa Mendoza was once attached to a talented drug smuggler in Mexico. That is, until he started skimming off the top and got himself killed. She had to flee to the back end of Spain. But her story doesn’t settle down into a quiet life there. More drugs, organized crime, and heart break ensue.

Set in the 1980s, this is a sweeping story about endurance. Teresa was born into a world where there are few paths out of poverty. When fortune gave her a chance, she took it, though it eventually cost her dearly. Teresa was a fascinating character. She starts off relatively innocent. She’s not above doing a little weed now and then or getting drunk or having sex with her drug smuggling boyfriend. But she herself has nothing to do with the business. She still has her little job, is young, and just having fun. But once he’s killed and the narcos come after her (because they not only take out the man, but also his woman) she can either lay down and die, or pick up that handgun and even the playing field.

She makes it to Spain partly because she is smart and lies low but also because a friend owed her now dead man a favor. There she works at a seedy bar and has sworn off the drug smuggling life completely. That is until a Gaucho shows up and makes her heart flutter. Once again, she is pulled back into that world. However, this time she refuses to be an ignorant hanger-on. She makes it her business.

Every step she takes, she gets tougher. She’s really very practical about it all by the end, like nearly all the emotions have been wrung out of her through the years. It is an amazingly well done story arc. I so enjoyed watching her transformation. Her time in prison was especially interesting because it was filled with inner reflection and a sad humor, and books.

So obviously I am in love with Teresa Mendoza. Let’s talk about everything else. The plot, the pacing, the side characters, the sex – they too are also very well done. I loved all the Spanish and Mexican vocabulary and cultural references tossed in. I was never too sure where the plot was going, but I was thoroughly entertained and totally engrossed in finding out what would happen next.

The tale is told in two voices: Teresa’s and a reporter who is tracing her life for an in-depth biography. So sometimes we know that Teresa must have made it through some pinch because the reporter is talking to her or someone else about the incident in the past. Using the reporter character allowed us readers to see sides of Teresa or the collateral damage of her work that we wouldn’t see through Teresa’s eyes. It was clever. This was a very satisfying book and I look forward to enjoying more of Perez-Reverte’s works.

Narration: Lina Patel was the perfect voice for Teresa. She has a beautiful Mexican accent and I loved her fluid pronunciation of all the Spanish words, including the long strings of insults. She had distinct voices for male and female side characters as well.