Set in early 1900s Maine, Frances Schmidt isn’t your average historian. Nope. She’s a woman. She has worked very hard to get her peers to ignore this fact so that she can finish her degree. She’s so close and the last big hurdle is completing her dissertation, one that she has focused on the myths and legends on merpeople. So she must travel to Maine to try to persuade Garrett Hathaway of letting her study his collection of such legends and tales. Since he is a very private person, she has quite a challenge ahead of him. 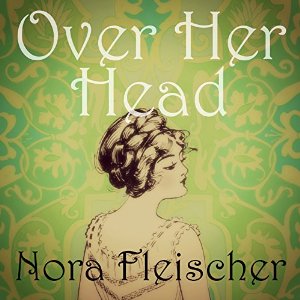 The bulk of this story is told through Frances eyes and I really enjoyed her character. She’s chosen a field that is male dominated and has a passion for it. Her peers are a mix of men; some support her efforts, some don’t mind her as long as she doesn’t act like a woman, and then there are some who actively try to block or sabotage her efforts. Also, I liked that she isn’t tall and willowy, but rather short and curvy. Some even call her stocky.

Garrett starts off as a pretty ordinary, if a little reclusive. However, he has a secret, one that has both left him lonely and hating himself but also given him such glee. I also suspect it is the reason he has such an athletic body.

The relationship between these two starts off perfectly professionally. Frances stays at a boarding house while in Maine, making sure to leave Garrett’s house each day before sunset. Propriety must be maintained. She initially bribes him with cookies she baked herself. This later turns into a mutual enjoyment of baking. It was quite sweet to watch the romance blossom between these two, and come to near disastrous ruin a few times due to misunderstandings. These two had to work for their love!

Sprinkled throughout the story are tidbits on merpeople – fanciful bits tossed in by the author but then also poems and works by other authors are cited by the main characters. These were especially nice touches.

My one little quibble occurs near the end of the story, and as such, deals with a spoiler. SPOILER ALERT It wasn’t clear to me how or why Frances became a mermaid when she takes a swim with Garrett. He thinks he transmitted a disease to her, but surely he (or other merpeople) have swum with other people and they didn’t run into merpeople. I could have used a few lines stolen from mythology to make this more plausible. Or perhaps some mystical/magical reason for the transformation. END SPOILER

Other than that one minor criticism, I really enjoyed this novella. The mix of merpeople myths, historical fiction, and romance kept me listening and not wanting to set the book down.

The Narration: Anna Starr was a good pick for Frances. She had a solid, no nonsense voice for her that could also be a bit vulnerable when it came to matters of the heart. Starr had a range of voices that allowed both male and female characters to come through distinctly.