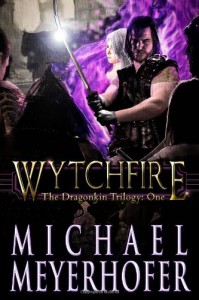 We open with Fadarah, who is a kind of warrior mage, a half-breed, and a key person in the siege of the city. The Shel’ai control the nightmare that can tear down city walls, and if let off its leash, completely destroy a city. Then we meet Rowen Locke who is a down-on-his-luck wannabe knight. He failed his goal in achieving knighthood, and then fails to sense a trap on the highway and becomes the victim of a nasty mugging. Penniless, injured, and jaded concerning the bulk of the human race, his adventure begins.

Wow! Just, wow! This was a fun, entertaining, impressive work of fantasy fiction. If you enjoy your Tolkien-esque adventures, then this is definitely a book for you to check out. There was plenty of world-building (peoples from various ethnicities – fictional and real) along with characters of depth. The book had my attention from the beginning because Fadarah seems to genuinely regret what he must do, seems a little disgusted at the methods for conquering the city, and yet he goes forth and does it. Then Rowen. Ah, the poor man walked on stage with so many secrets! He was a tantalizing character to follow and watch some of those secrets come into the reader’s light.

I quite enjoyed the mixing of elements from the legends of King Arthur and feudal Japan. The Knightly Order of the Lotus was a nice touch. And the action was quite engaging. There’s sell swords, brigands, warrior mage, etc. The average farmer seems to be in some sort of recession, which makes sense with war here and there. But sprinkled among the action are moments of introspection by the characters, so the reader doesn’t get battle fatigue.

While I would have liked to see a few more female characters, it seems I am always saying that. I can just pretend Rowen or Fadarah is a woman in disguise. ;) There were a few typos in my version, but it is an early ebook review copy; these typos were not enough to distract me from enjoying the overall book.
Tweet