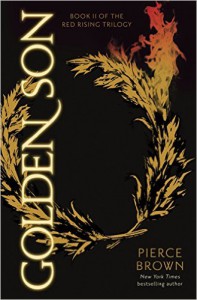 Note: You really need to read Book 1, Red Rising, to understand this book.

This book picks up several months (a year?) after the end of Red Rising. It’s a space battle! Well, it’s a training space battle for the Academy. Darrow and his crew finish out the contest well enough, but then Darrow is publicly humiliated. Darrow is on the brink of losing it all and he must make some daring moves to maintain what he has worked so hard to achieve. Yet with his boldness comes new challenges and new enemies.

I thoughts the story couldn’t get any better when I finished Book 1, but I was wrong. Golden Son has impressed me more than Red Rising did. I became attached to several of the characters in Book 1 and that held true for Book 2. Darrow remains a complex character, discovering new parts to himself as he continues his ruse as a Gold. The layers of lies start to weigh on him and some of his closest friends notice his moodiness. There were so many times where I wasn’t sure whether Darrow should open up to a friend or not – can any of them be trusted with his deepest secret? Argh! It was nail biting!

There were moments where I was cheering the book on, doing a little fist pump when no one could see me doing so. Then there were times that my eyes misted up a bit. There are several intense moments in this book. Tactus. Mustang. Quinn. Darrow’s mom. Even though this book wrung emotions from me I wasn’t sure I had before, when I finished it, I wanted to go reread the first 2 books again.

While Book 1 took place all on Mars, Book 2 spreads out a bit and we get to see more of this terraformed solar system. Book 1 taught us the basics of this hierarchical society, but Golden Son shows us people from these other castes and what they are capable of. Darrow certainly has his hands full with the Sons of Ares and trying to upturn this caste system.

And why don’t we chat about the Sons of Ares. I, like Darrow, was expecting them to be all on the same page. Unfortunately for Darrow, that was not so. This added another dimension to the plot and made one more dangerous pitfall for Darrow to avoid. Though I did guess who Ares was early on, it was still a great reveal scene.

Next to Darrow, Sevro is my favorite character. He acts crude and rude all the time, but he has these shinning moments where he sets the bar high for what true friendship is. To my surprise, I became a bit attached to Victra. Perhaps it was her unashamedly flirtatious manner. Ragnar was an excellent new addition to Darrow’s circle of friends. The characters all around are just very well done. I love that the author doesn’t hold back from placing female characters in every job a male character traditionally holds in so much of SFF literature. The swordswoman Ajah is terrifying. The Sovereign is wickedly smart but also too proud of that fact.

The ending is super intense and I am so glad I have Book 3 lined up and ready to go. Golden Son does end on a cliffhanger and if I had read this book a year ago before Book 3 was out, this might have bothered me. Books 1 & 2 have set the bar high for Book 3 – I have every expectation it will live up to it!

The Narration: Tim Gerard Reynolds continues to do this series justice. I love that he shows a little of Darrow’s Red heritage in his accent when he thinks of home, yet maintains his cultured Gold accent throughout the novel. His voice for Ragnar is very well done, considering limitations on human vocal cords. Surprisingly, Reynolds does a very good sexy vixen for Victra.