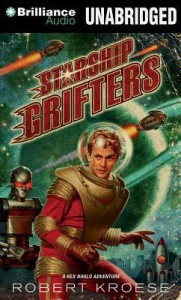 Rex Nihilo thinks he savvy and smart and no amount of evidence to the contrary will convince him otherwise. Luckily, this robot sidekick (and keeper), Sasha, is able to navigate a safe-ish path for both of them…. most of the time.

This was a very, very fun book. The humor reminds me a bit of Douglas Adams but better because nearly all of it is delivered in Sasha’s dead straight manner. She is a robot after all. This book is clever. The dialogue is witty, the characters are fleshed out, the plot is carried through. And I snicker-snort laughed my way through it. Sasha is the perfect character to deliver much of the humor in this book in that straight, matter-of-fact voice of hers.

Sasha is one of those nearly independent thinking robots. Someone somewhere at some time decided it was a bad idea to have sentient robots roaming the galaxy, so a governor was installed in them that monitors for individual and original thoughts and if any are detected, the robot is shut down for 15 seconds and a small part of its memory wiped. So, every time Sasha is on the verge of an independent thought, she shuts down for 15 seconds only to come back to it with no recall of what she was thinking or about to say. This little gimmick added to the humor of the book quite a bit.

The story starts off with a card game in which Rex unwisely bets his entire wealth, as little as it is. Then we wins some hands, and a few more, and the rich guy he’s up against starts making ludicrous bets – his ship, and then a planet he owns. Rex wins, much to the amazement of nearly everyone, just in time for a ruckus to start. Rex and Sasha flee in the newly won space ship, Flagrante Delicto. Meanwhile, Sasha who is always cogitating if not outright thinking, has discovered that Rex’s new planet is actually in arrears on some taxes. So he is now in a great amount of debt. The kind of debt that attracts bounty hunters.

But he has bigger problems that that right now (at least until Pepper Melange in her ship Bad Little Kitty shows up). As circumstances evolve, he gets sucked into the conflict between the Malarchian army and the revolutionary Revolting Front. He makes promises he can’t possibly keep to both sides. Rex is a total scoundrel and Sasha keeps him alive and sometimes makes him look competent.

There were just so many fun parts in this book. At one point, Sasha takes a pretty heavy hit to the face, which does some damage to her face plate. She and the guard start up a conversation about armor and what works best for both protecting and damaging. I swear, they were flirting! And Sasha deserves a fun date.

The ending had a surprise twist that was cleverly done. There’s definitely more going on with some of these characters! I’m really hoping for more Sasha/Rex adventures.

The Narration: Kate Rudd was perfect for this book. Since everything is told through Sasha’s eyes, Rudd maintained this polite yet just-the-facts voice for the entire book. It was perfect for delivering the humor. Of course she did character voices for whenever someone else was speaking and she kept them all quite distinct. There’s an evil villain who is described as having a screechy voice and Rudd did that one quite well – definitely a screech but not so much that it got on my nerves. I also liked her sexy voice for Pepper.