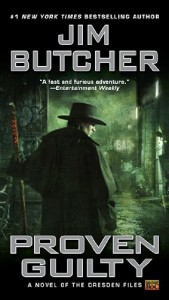 Harry Dresden, Chicago’s only PI wizard and now a Warden for the White Council, gets called up by Molly to bail her friend out of jail. He’s not happy about it, but he knows that Molly is having some issues. He gets talked into checking out SplatterCon!!! where Molly is one of the lead organizers. The White Council has reports of some evil magic happening in Chicago and they’ve tasked Harry with finding the source and dealing with it. SplatterCon!!! turns out to be a bit scarier than anyone figured when a horror movie monster comes to life and starts taking out the guests. Someone is inviting in phages from the Nevernever. Not good!

Later on, Molly disappears and Harry has to try every trick in the book to locate her. While he is attempting to locate her, he learns some interesting things about Charity, Molly’s mom. I really liked that we get to learn more about her as she has been a rather minor character in the series so far. As we know from previous books, she doesn’t like Harry, and now with Michael (her husband and a Knight Templar) away on ‘business’, she is stuck in this position where Harry is her best hope of finding and helping Molly.

Later on, Harry and some trusted allies have to suit up and head into the Nevernever. Without giving too much away, Thomas of the White Court vampires, is an excellent fighter and there are some great scenes with him kicking in teeth and stomping on faerie wings. The efforts of Harry and crew in the Nevernever have repercussions, some of which are known by the end of this book, but then there are some that don’t become apparent until later in the series. That’s another cool thing about these books. In rereading the series, I can see these ripples easier and it’s just amazing how well laid out the big arching plot is for the series.

Before the book is over, Harry has to face some of his fears as well. One of them, he knows is coming and he has time to think about how he will handle it. The second comes as a bit of a surprise and a relief once he starts talking about. I really liked that Harry had to deal with some of his biggest fears in this book.

At the end of the previous book, Dead Beat, Thomas moved out of Harry’s place. Harry spends the entire book wondering what Thomas is now doing for a living. He’s looking healthy and Harry worries that he’s turned to the dark side in feeding. The ending to this little mystery is quite amusing but we don’t get that until later in the series.

As usual, there’s a slew of returning characters in this book. Police officer Rawlins, who knew Murphy’s dad back in the day, is tasked with guarding a crime scene that Harry wants access to. Murphy of course is around and also accompanies Harry into the Nevernever. Lashiel’s carbon copy in Harry’s head is rather insistent in being of assistance and Harry learns some mental skills in blocking her out. The Lady Summer Lily and her Knight Fix put in an appearance as well. Even Harry’s godmother has a little role. There’s more, but these are the ones that stood out to me. This book is another great addition to the series and I had a lot of fun with the fear theme for the book.

Narration: James Marsters continues to do a worthy Harry Dresden. His female voices are on good display with this book : Charity, Molly, Lashiel, Murphy, Harry’s godmother, the Summer Lady, etc. He makes them all distinct and feminine.